FOR IMMEDIATE RELEASE No. 3106


Commercialization for electric power infrastructure is planned from around fiscal 2018. Other applications will be developed in collaboration with the Strategic Innovation Promotion Program (SIP) challenge for the cyber security of critical infrastructure. 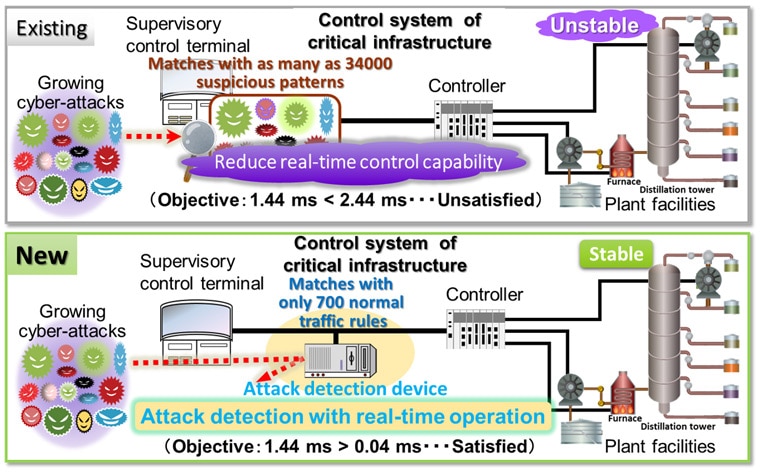 Realization of the new technology was partially supported by the results of "Cyber-Security for Critical Infrastructure" undertaken by the Control System Security Center (CSSC). "Cyber-Security for Critical Infrastructure" is part of the Cross-ministerial Strategic Innovation Promotion Program (SIP) promoted by the Council for Science, Technology and Innovation and has been commissioned by the New Energy and Industrial Technology Development Organization (NEDO).

-
The technology is the first in the world, as of May 17, 2017, to define the detection rules based on the normal commands for each operational state of the control system and to interpret deviations from the normal commands as attack.
-
Real-time operation is ensured for the control system under our consideration when attack detection is in use because the technology does not involve a time-consuming matching process for suspicious patterns.
-
The technology contributes to infrastructure stability by reducing the detection time and ensuring minimal influence on control-system processes that must finish within certain time limits.

Cases have occurred in which advanced cyber-attacks have penetrated control systems to issue commands that pretend to be normal and are highly indistinguishable from real commands. Existing detection methods that compare incoming traffic with known suspicious patterns can fail to detect such attacks. Comparison with the enormous volume of known suspicious patterns can take time and cause control system operations to fail.


Mitsubishi Electric observed that normal control-system traffic in critical infrastructure differs if the system is operating, not operating or under maintenance, so the new technology uses different detection rules for each operational state. With cyber-attacks continuing to increase, it takes an enormous amount of time to generate suspicious patterns and search for matches. But normal commands in control systems are limited, so the rules can be limited, which enables Mitsubishi Electric's new technology to search for matches quickly and detect attacks while preserving the real-time operation of control systems. The company evaluated the processing time of attack detection for the control system under our consideration. The evaluation revealed that the new technology only takes 0.04 ms, compared to 2.44 ms for an existing technology, while the real-time requirement is 1.44 ms.

As IoT pervades the field of infrastructures, cyber security is becoming increasingly important for critical infrastructure that underpins society. Until now, the safety of infrastructure for electric power, natural gas, water, chemicals and petroleum has been ensured through physical isolation, firewalls for traffic control and stringent operational management. In recent years, however, there has been a rise, especially overseas, in advanced cyber-attacks that penetrate infrastructure control systems to send malicious commands disguised as normal for the purpose of inflicting damage, such as power blackouts and equipment destruction.