FOR IMMEDIATE RELEASE No. 3000

TOKYO, February 17, 2016 - Mitsubishi Electric Corporation (TOKYO: 6503) announced today that it has developed advanced driver-assistance algorithms for lane departure and passing based on perimeter sensing, and collision avoidance based on emergency steering, ensuring that its comprehensive autonomous-driving system will meet Level 3 criteria for performing all acceleration, steering and braking operations expect when the system senses that the driver should take control. Mitsubishi Electric will now accelerate trails in actual-use environments, aiming at commercial usage. 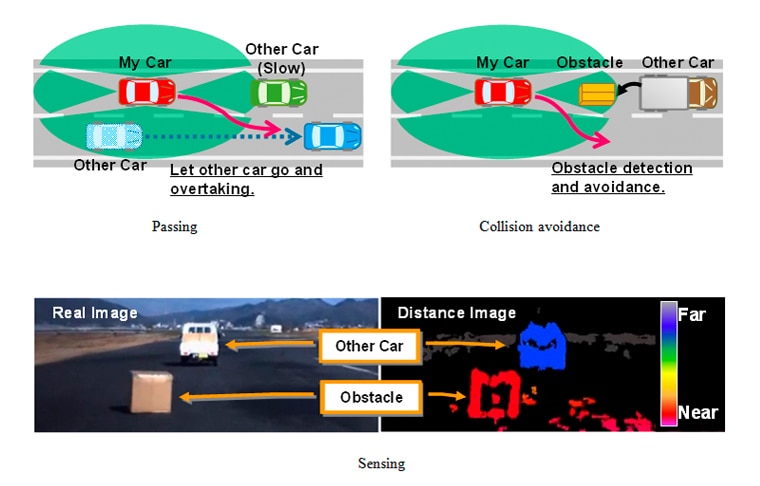 The algorithm determines the timing for passing, first by evaluating sensory data on surrounding obstacles obtained from several sensors including cameras and millimeter-wave radar. After predicting the paths of moving obstacles and determining that there is no possibility of collision, it checks to see if any car is coming up from behind in the passing lane. If a car is coming, the system lets the car go by safely, then changes lanes to overtake the car ahead.


In the case of collision avoidance, the system looks for surrounding obstacles using several sensors including cameras and millimeter-wave radar, and then predicts the paths of any moving obstacles and the possibility of collision with them. If an obstacle is detected, the system immediately determines if braking would be sufficient or if evasive steering is required. Evasive steering is used only if the car is traveling at less than 60 kilometers per hour and the distance between the car and the obstacle is more than 30 meters.


The market is rapidly growing for driver-assistance systems capable of autonomous driving and active safety management. Concurrently, the development of autonomous-driving systems is being encouraged by national governments in Europe, the United States and Japan. Carmakers and suppliers are aiming to launch commercial systems for Level 3 autonomous driving within the first half of the 2020s.