FOR IMMEDIATE RELEASE No. 2997

TOKYO, February 17, 2016 - Mitsubishi Electric Corporation (TOKYO: 6503)has created a next-generation manufacturing technology that virtualizes and simulates the motion of products and sensor data in FA controllers, making the startup and replacement of assembly lines more efficient and reducing on-site adjustment time up to 75 percent. It enables operators to generate errors such as temporary line stops in a virtual environment for the FA controller and then adjust actual line operations accordingly.


Currently, assembly line validation is carried out manually according to a test scenario, requiring repeated operational tests on an actual line to generate uncommon and hard-to-replicate errors. Mitsubishi Electric's virtualization technology for FA controllers simulates product signals and sensor data as if the actual line were running. Because the design of the virtual line is flexible, the system enables quick reproduction of errors. Also, since actual products are not required to be on the line during the test, accidental damage and preparation costs can be significantly reduced. The virtualization technology reduces on-site adjustment time by 75 percent compared with the current method.


Test programs previously used in computer simulations can be imported for the virtualized testing. The technology can also be combined with programs that replicate temporarily malfunctioning products or sensors for automatic verification. 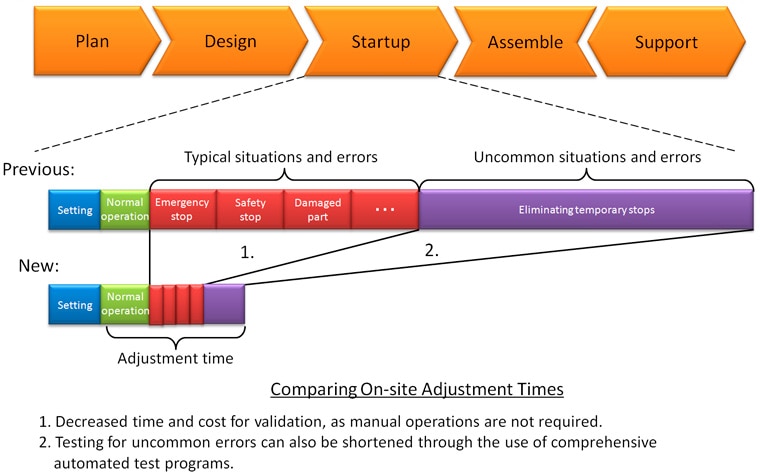 Recently, customers have increasingly demanded multi-product, variable quantity production capabilities to meet their diverse and unique needs. Manufacturers need to be able to expand and redesign a line while keeping downtime at a minimum, so the industry has been focused on using the computerized pre-validation of virtual lines to expedite the process. However, even with pre-validation, it is still necessary to confirm the results on an actual line due to slight differences in virtual and actual environments. Human operators have to arrange and inspect the line, which can be costly in terms of time and labor, and it is also difficult to completely eliminate uncommon errors.