FOR IMMEDIATE RELEASE No. 2995

TOKYO, February 15, 2016 - Mitsubishi Electric Corporation (TOKYO: 6503) announced today that it has developed a multi-subcarrier optical transceiver technology that significantly increases the data rate of terrestrial fiber optic communication. A single receiver was used to achieve a data rate of one Terabit per second (1Tb/s), a 10-fold improvement over current mainstream commercial transceivers, which operate at up to 100 Gigabits per second (Gb/s) per optical receiver. This technology is expected to contribute to the development of next-generation networks that can use existing optical fibers to smoothly deliver high-resolution videos and other data-heavy content to a larger number of users. 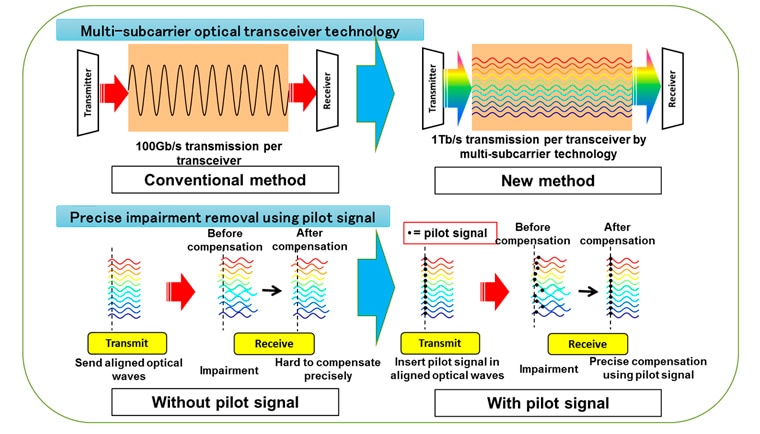 In optical communication, signals are carried on light waves known as carriers. Due to the limitation of signal bandwidth that can be generated without significant distortion, the throughput of a single carrier is also limited. Mitsubishi Electric achieved the 1Tb/s transmission rate with existing optical fibers by using a multi-subcarrier technology that transmits 11 light waves (subcarriers) simultaneously in a single channel by using an optical comb, a device that creates a series of discrete, synchronized optical waves equally and densely spaced in the channel. While conventional methods would require 11 receivers for the same number of subcarriers, this new technology only requires a single receiver due to the use of densely spaced, synchronized subcarriers in a single channel and novel multi-subcarrier signal processing algorithms. No major changes are required to the existing optical network infrastructure, keeping the cost of deploying this new technology quite low.


Usually, when using subcarriers for optical communication, each subcarrier undergoes different signal distortions, which results in damaged data like video distortion on the receiving end. To avoid this problem, Mitsubishi Electric used pilot signals to accurately realign the subcarriers at the receiver. Known pilot symbols are periodically inserted into the transmitted signal, which serves as a landmark for correct orientation of all subcarriers and prevents data damage.


Due to the expansion of the Internet and smartphones, communication traffic is dramatically increasing. Meanwhile, revenue is becoming decoupled from traffic volume as OTT (Over The Top) applications provide various services free of charge. Communications companies need to provide high capacity as well as low cost, so it is important to develop technologies that improve transmission capacity on the existing optical-fiber network.


This technology has enabled an experimental demonstration of 1Tb/s net data rate transmission using a single optical receiver. The experiment also achieved a spectral efficiency of 9.2b/s/Hz, which as of January 2016, was the highest in the world in a 1Tb/s transmission using a single optical receiver. In this work, Mitsubishi Electric collaborated with the Optical Networks Group at University College London , who jointly lead UNLOC, a large UK research project to unlock the capacity of optical communications, with a team at Aston University.