FOR IMMEDIATE RELEASE No. 2971

TOKYO, October 27, 2015 - Mitsubishi Electric Corporation (TOKYO: 6503) announced today it has developed a technology to detect absent-mindedness and other cognitive distractions in drivers when their vehicles are traveling straight, using a type of machine-learning algorithm known as deep learning. The company believes this is a first in the automotive industry.


Although systems exist to detect drivers who are visually distracted due to drowsiness or inattentiveness, the detection of cognitive distractions has been difficult because symptoms sometimes appear in a driver's behavior or biological patterns, rather than in their face or eye movements. Mitsubishi Electric's new technology uses a machine-learning algorithm to analyze time-series data, including information about the vehicle (steering, etc.) and driver (heart rate, facial orientation, etc.), to detect and warn drivers about potentially dangerous indications. 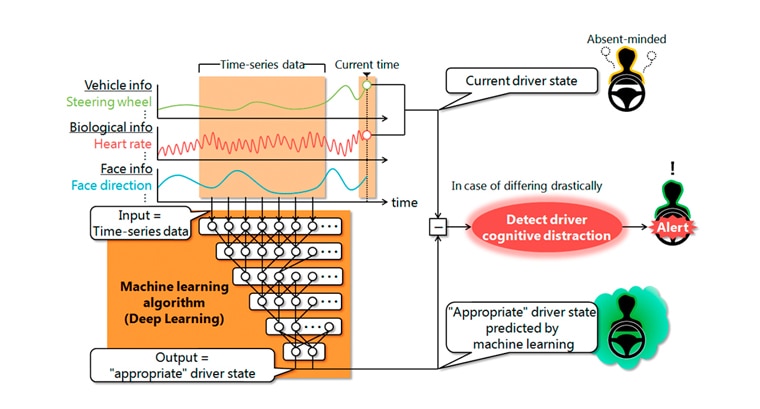 Deep learning enables machines to use both forward- and backward-moving time-series data, which helps to reduce errors in predicting driver actions by 66 percent compared to Mitsubishi Electric's conventional algorithm, a so-called the three-layer neural network.


The technology will be displayed during the 44th Tokyo Motor Show 2015 at the Tokyo Big Sight exhibition complex in Tokyo, Japan from October 29 to November 8.


Technologies for detecting cognitively and visually distracted driving are expected to be installed in driver sensing units sold commercially from around 2019 or beyond.