FOR IMMEDIATE RELEASE No. 3003

Will ensure accurate, flexible and safe replacement of segment mirrors

TOKYO, February 17, 2016 - Mitsubishi Electric Corporation (TOKYO: 6503) announced today that it has completed a prototype robot for its segment-handling system (SHS) designed to replace the 492 segment mirrors comprising the 30-meter primary mirror of the Thirty Meter Telescope (TMT®) that is planned to be built on Mauna Kea in the U.S. state of Hawaii.


TMT, a collaboration among five countries─Japan, the United States, Canada, China and India-will be used to explore the early galaxies and stars of the universe. Its primary mirror is composed of 492 hexagonal segment mirrors, each weighing around 250 kilograms. Mitsubishi Electric has been developing the main structure of TMT, as well as the SHS that will be used to replace the segment mirrors as their aluminum-coated surfaces degrade. The robot, thanks to its automated functions, is expected to help maximize TMT's time available for observations. 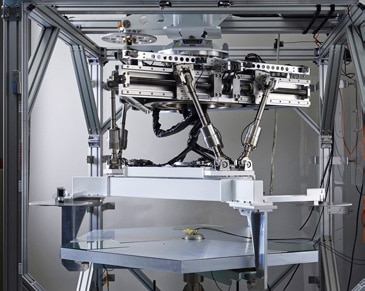 The robot is designed to recognize its position and attitude relative to those of the targeted segment mirror. The problem of sensing the segment mirrors, which have highly reflective surfaces, was resolved by projecting a checkered-flag pattern on them. Three newly developed vision sensors enable the robot to safely approach the mirrors based on accurate recognition of position and attitude.


The robot also incorporates force-control technology to compensate for any error when it approaches a mirror. The technology uses a force sensor to detect loads applied to a mirror with an accuracy within less than one kilogram during the robot's six degrees of freedom (6DoF) movements (forward/backward, up/down and left/right 3DoF, and rotations of each 3DoF). The robot's three independent arms each grasp a mirror with gentle handling, helping to equalize the mirror's 250-kilogram weight and compensate for any deformation caused by the weight. The original design of an installation shaft and force-control algorithm help to reduce the time needed to replace the segment mirrors by 60 percent.


The SHS includes a main bridge that projects over the primary mirror when a segment mirror is replaced. The bridge rotates in a circumferential direction and the robot moves forward and backward underneath the bridge.